Learn how to make Romano cheese at home by following our easy to follow step by step guide below.

Romano Cheese is a hard, salty Italian cheese, perfect for grating. It is used in a similar way that you would use Parmesan cheese.

The taste of a Romano cheese can be described as sharp and salty, and if aged for over 12 months it can also have a slightly spicy flavour to it. Parmesan, as a comparison, has a much milder taste than Romano. 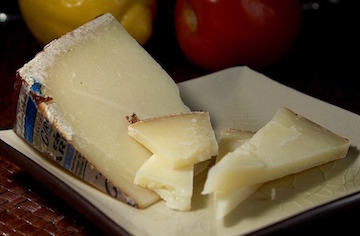 Where Does Romano Cheese Come From?

Romano cheese originated in the countryside close to Rome, hence where the name comes from. The cheese first came about over 2000 years ago, and since then the recipe has not changed in Italy. In modern Western culture, variations of the original recipe have emerged to meet food safety standards, such as using freeze dried lipase and liquid rennet. However, in it’s essence the recipe is still the same.

Traditionally, making this cheese in Italy meant warm temperatures. As such, the cheese had to be salted in order to prevent it from developing bad molds during the aging process. This is what gave Romano Cheese its notably salty flavour, which I love!

As you may know, I make all of my cheese recipes with cow’s milk. As Romano cheese is most commonly made with sheep’s milk, I thought I would explain the three different variations of Romano cheese. Each of the three types of Romano differs in taste and appearance depending on the milk that is used.

Perhaps the most well known Romano cheese is Pecorino Romano. This cheese is made using sheep’s milk; hence the name Pecorino, as ‘pecora’ in Italian translates as sheep. Pecorino Romano is naturally a creamy white colour. The taste is very sharp, salty and slightly tangy or spicy.

Caprino Romano is a variation of Romano that is made with goat’s milk. It too has a creamy white colour. Although it differs very slightly in taste to Pecorino, it is also a very sharp cheese.

The third variation of Romano cheese is known as Vacchino Romano. This variation is made with cow’s milk, which gives it a much milder taste compared to its sharp Pecorino and Caprino counterparts. It will also naturally give off a slightly yellowish white colour, rather than a creamy white.

The recipe below is for Vacchino Romano. If you have tried to make Parmesan cheese then this will be right up your ally. The process is very similar to making Parmesan, however there are slight differences in the temperatures and pressing times. The most notable difference between making Parmesan and Romano cheese is the type of milk being used.

In the Vacchino Romano recipe below you will notice that full cream milk is used. This differs from Parmesan, which requires skim milk.

Have a read of the recipe and give it a try. Head over to the Curd Nerd Forum to post any comments, pictures or questions. I would love to see how your Vacchino Romano turns out.

How To Make Romano Cheese

Age for at least 10 months, preferably 12 before enjoying. You can age the cheese for up to 24 months – the longer you leave it, the stronger the taste will be.

The wait is definitely worth it for this delightful cheese!

Do you have any questions or comments about how to make Romano Cheese at home? Join the discussion over at the Curd Nerd Forum.

We would love to hear from you! I hope you love this romano cheese recipe as much as I do.