If you are new to the hobby of cheese making, you might have no idea, just as I didn’t when I first started out. I had never heard of it in any context and it took a bit of research to learn why and when I would use it.

So I thought I would help you out with telling you what I learnt back in those early days. 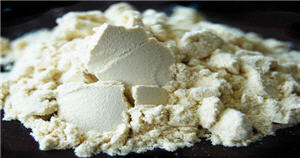 Lipase, generally, are quite complex and clever wee things but basically Lipase can be described as:

“A lipase is an enzyme that catalyzes the formation or cleavage (hydrolysis) of fats (lipids).”

The Wiki definition goes on to explain that Lipase are essential in the digestion, transport and processing of dietary lipids such as oils, fats and triglycerides and are present in most, if not all, living organisms.

In the context of cheese making, Lipase are one of the many enzymes that are present in raw milk. The enzymes attach themselves to the fat globes of the liquid and break them down, which then causes the fatty acids to be released.

The release of those fatty acids in turn creates the aroma, texture and sharp taste common (and desired) in most Italian cheeses, as well as some Feta and Blue Cheeses. Lipase enzyme overall enhances the flavor of those cheese.

Unfortunately, during the handling and processing of commercial milk, particularly if it is pasteurised, the lipase enzymes are usually destroyed. This makes achieving that sharp taste more difficult so Lipase can be added back into the milk, to reintroduce those enzymes and their usual function.

Even with raw milk you may still require an addition of Lipase as the enzymes can be affected and reduced by the health and diet of the animal they are taken from.

Like Rennet, Lipase for cheese making is normally taken from kids, lambs or calves. It is definitely not a vegetarian product. Some Lipase products have been created with plant extract but due to the very minimal amount of Lipase present in plants it is considered an inefficient source of the enzymes.

Lipase should be used following the instructions of the supplier and please don’t work with the theory that adding more lipase will add more flavour. It won’t. It is the work the Lipase does that increases the flavour so as long as you use it correctly, the amount suggested should give you the flavour you want.

Most suppliers will have more than one variety of Lipase powder, with some giving a more mild taste, and others creating a much sharper taste.

Below is the mild lipase powder that I use.

I would recommend trying the milder version first and moving to the sharper Lipase if you still don’t have the flavour you desire, and expect.

Below is the sharp lipase powder that I use. 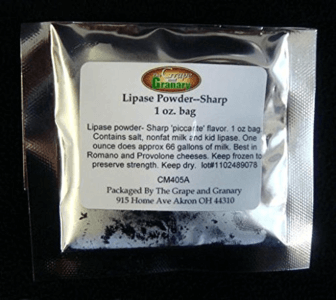 Your Lipase powder should be diluted in water and then added to the milk before adding the Rennet, this is after the starter cultures have been through their ripening period.

Storage of the lipase powder (normal form) should be in the freezer to maximise its life and effectiveness.

Initially when I started out making cheese I decided I didn’t need to worry too much about adding extra ingredients until I understood the basics of the cheese making process, but after finally deciding to see what the fuss was about with my Feta.

I encourage you not to underestimate the difference in the results you get with the additional of Lipase. It really does bring your Feta, and Italian cheeses, to a whole other taste level.

Do you have any questions or comments about What is Lipase powder or how to use it? Join the discussion over at the Curd Nerd Forum. We would love to hear from you!

4 thoughts on “What Is Lipase? The Purpose Of Lipase In Cheese Making”