Most cheese recipes require salt to be added, rubbed or soaked in at some stage in the cheese making process.

Salt is an important part of cheese making and has multiple purposes including assisting in drawing out whey, preserving the cheese and protection against undesirable moulds.

Bathing your cheese in a brine solution is a common instruction in cheese recipes for adding salt, particularly for cheeses that have a short aging time, and it is an efficient and reliable way to do so as the salt absorption is quick and it is easy to get an even coverage. 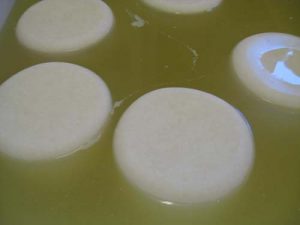 Saturated brine is anything over 26% salt (or between 70-90% saturation) and some cheese making recipes call for this strong brine solution to be used.

Knowing if you’ve mixed exactly the right concentration of brine solution can be difficult but the following is a pretty accurate guide:

Instead of trying to measure or guess the recommended brine concentrations for a particular recipe it can seem easier to simply make up a saturated brine.

But just be aware that a saturated brine will pull moisture from the surface much quicker and can cause a hard rind to form which may slow or prevent further salt uptake or effect the surface of a cheese which wouldn’t normally have a hard, thick rind.

It’s fair to say that without testing equipment, anything less than saturated brine can be hard to quantify, where as it’s easy to conclude you have mixed a saturated brine by the following signs:

When brine bathing ensure you regularly turn your cheeses over so that all surfaces are exposed to, and are able to absorb the solution. This is particularly important with saturated brine given the cheese will float and the upper surface will sit above the brine level.

Also, try to use your brine at temperatures of between 10-12 degrees Celsius if possible. This improves the salt absorption, pulling more moisture from the cheese and improving rind creation.

Brine that is too cold won’t be taken up as easily and may cause too much moisture to be left in the cheese. Brine that has been left to get too warm may nurture bacteria you don’t want to encourage.

Brine can be used repeatedly and some say that it can actually improve the characteristics of a cheese as the brine picks up whey and particles from each cheese and imparts its flavour into each subsequent cheese.

If you do choose to reuse your brine, don’t forget to add more salt back in as required, so that you maintain your salt concentration levels and if you are concerned about undesirable bacteria in the brine, just boil and cool it before using and storing.

Store your brine in the fridge in a sealed container but as mentioned, bring it back to room temperature before using for your next cheese.

Do you have any questions or comments about how to use brine for your Home Cheese Making? Join the discussion over at the Curd Nerd Forum. We would love to hear from you!