When I last wrote, I asked for your help in sharing with the Curd Nerd readers what other home cheese makers are using to ripen and age their cheeses.

There comes a time when most home cheese makers decide to move on from making fresh cheeses, to aged cheeses, but one thing that often holds them back is the seemingly difficult task of creating the right aging environment for their cheeses to mature in.

But a cheese ripening box really doesn’t have to be that hard, or too expensive.

From the emails I received, a number of Curd-Nerds agreed that using a wine fridge was one of the simplest and more effective solutions to set up, but I also received an equal number of responses from Curd Nerds who use an old refrigerator to store and age their precious cheeses.

In some cases these fridges were newer, fully functional fridges. In others, the fridges were older and weren’t required to actually work, being used turned off as a cheese ripening box, rather than a cooling mechanism, just like a large chilly-bin.

She is using an old refrigerator, which is left unplugged and is instead cooled with 2.5 litre bottles, filled with water and frozen.

These frozen bottles also serve as a means of providing humidity, as they melt and produce condensation. Carmen turns her cheeses every day and, at the same time, replaces the frozen water bottles to keep the temperatures cool, and the humidity levels up.

Carmen uses separate containers to store each cheese, which is not only useful for protecting against cross contamination of molds, but also makes it possible to raise the humidity for each cheese, if necessary, with a lid and an increase in moisture in that one container. 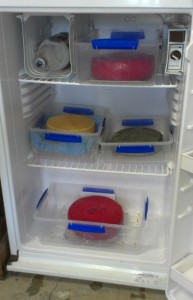 Looking at the great progress Carmen’s cheeses seem to be making, this solution is obviously working well and is cheap, and easy to maintain.

The only problem cheese makers in warmer climates might have with this solution, is keeping the fridge cool enough without it being turned on. Keeping the fridge in a cool spot in a garage or basement would certainly help if this is a concern though.

And of course if you use a fridge that does still work perfectly well, you can save power in the cooler months by using it turned off, and then power it back up in the warmer months to keep things cooler. The best of both worlds.

Another Curd Nerd, Naor Walloch, takes a slightly different approach by using his fridge turned on, but for only a certain number of hours each day, to have a highly successful cheese ripening box.

Naor also monitors his humidity levels with a combined thermometer and hygrometer, and as necessary, he raises the humidity levels by filling the drinks tray at the bottom of the fridge with water, and wicking it out with a hand towel draped in the water.

Naor has found this to be necessary when there are only a couple of cheeses in his fridge, but when he is closer to filling his ‘cave’ with cheese, the humidity levels self stabilize at 80-90%.

As you can see, neither Carmen nor Naor’s cheese aging solutions are overly complex, or laden with expensive and technical equipment. Which is why I particularly chose to share their cheese caves with you.

They really do demonstrate how simple and cheap creating a cheese cave can be, instead of scaring new home cheese makers away with set ups that are over engineered and cost prohibitive.

Thanks for your help Naor and Carmen : )

How To Age Cheese At Home Using A Cheese Fridge

Do you have any questions or comments about creating cheese aging environments? Join the discussion over at the Curd Nerd Forum. We would love to hear from you!