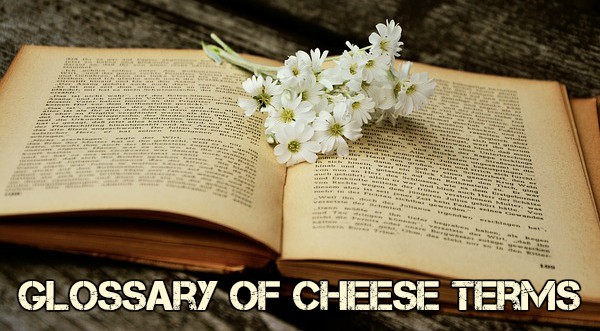 Following is an A – Z glossary of  the cheese terms I have come to know and understand during the course of my home cheese making. This list is by no means exhaustive as I am still adding all the extra details so if you have any other terms you want to help with, or suggestions for corrections, please comment in the forum and let me know.

Ammonia – smell that some cheeses e.g. Camembert get when overripe

Annatto – a natural cheese colouring agent which dyes the cheese to a yellow, orange or red hue

Cave – referring to a cheese cave, used to store cheese while aging

Clean Break – point where curds are ready to cut, obvious by curd breaking easily and cleaning when a finger or knife is run through it

Coagulation – when the milk begin to form together into the curd, after rennet is added

Curd – solid formation of the caseins and proteins in the milk, particularly with the use of rennet

Eyes – small holes in the cheese common in cheese such as Gruyere, formed by certain bacteria

Mold\Mould – microflora which grow on the cheese surface, some desirable, some not so

Paste – inside of the cheese

Pasteurisation – heat treatment of milk to kill all the ‘nasties’

Rind – outside of the cheese, sometimes referred to as natural or mold/mould ripened

Thermometer – used to measure temperature of milk and curd

Wax – cheese wax is used to coat and seal cheeses for aging, pliable and airtight

Whey – resulting liquid after curds have formed, expelled during pressing

Do you have any questions or comments about common terms used in home cheese making? Join the discussion over at the Curd Nerd Forum. We would love to hear from you!