Mold or mould? I don’t mind which way we all spell it but I do know that I’ve seen a lot more of it since I’ve been making cheese.

In the wonderful world of mixing together milk, cultures and bacteria you can end up with some pretty funky looking new friends living on your cheese.

Some moulds (as we spell it in the parts I live in) are desirable and we put special effort into inviting them into and onto our cheese, such as those in blue cheeses and on mould ripened cheeses like Camembert or Brie.

Others aren’t quite so welcome. These are those unwanted, unsightly moulds that turn up and appear to threaten the success of your hard earned cheese. 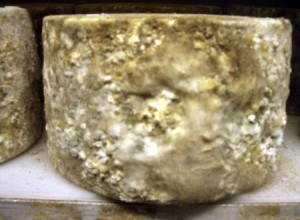 In general kitchen terms we are very quick to rid ourselves of moulds and throw away anything that has the slightest hint of mould or bacteria growing on it.

Although we are often reminded that it’s just penicillin, most of us aren’t keen to find out whether it will help us or kill us. We chuck it in the bin or out to the compost.

So how do you know then if your cheese has a good mould, or a bad mould? Do you have to immediately throw anything out that hasn’t got a ‘desired’ mould on it?

Mould On Cheese Which Could Be Harmful

Let’s list the colours and types of moulds that are usually unwanted (I don’t use the word bad because they most are pretty harmless if you can get rid of them):

But before you go throwing out those cheeses that have developed unwanted moulds on them, slow down for a minute. 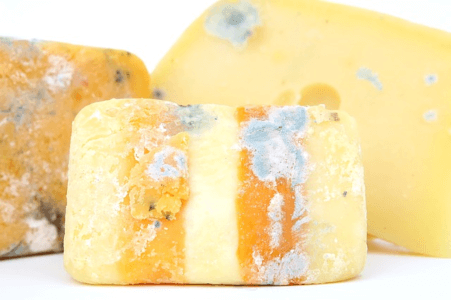 Cleaning It Up For A Better Cheese

There are ways to redeem your cheese.

For soft cheese you can carefully slice out the offending mould, re-salt with cheese salt the area and hope the mould doesn’t reappear.

For hard cheeses, create a wash of brine and white vinegar and gently rub/scrub the mould off the cheese. If you have a particularly stubborn patch slice it out and then wash with the same solution. Let the cheese dry fully before returning it to its cheese cave to continue aging.

This should sort out your problem immediately but you also really want to avoid the mould coming back.

So how do the moulds get on your cheese in the first place?

There are a number of reasons including:

At the end of the day, a little mould won’t destroy your cheese and in some cases, can be left completely alone to help in the aging of your cheese. We’ll get into that on another day but for now, use the technique above to get rid of it and keep things seemly.

Do you have any questions or comments about cheese mould? Join the discussion over at the Curd Nerd Forum. We would love to hear from you!

9 thoughts on “Cheese Mold | Is Mould On Cheese Harmful”