If you feel so inclined to play with some older, traditional methods of preserving cheese, ‘bandaging’ is an interesting and fun technique to try out.

It is also a more natural method that will appeal to those not wanting to preserve their cheese with colored waxes.

Bandaging involves wrapping your cheese in cheese cloth bandage and then sealing it with a fat based product like lard. And while it is still a slightly messy preserving technique much like waxing, it looks pretty neat when it’s done.

It also produces a better flavored cheese due to the molds that form around the bandage and contribute to the aging of the cheese. Bandaging also allows your cheese to breathe as compared to wax or vacuum sealing. 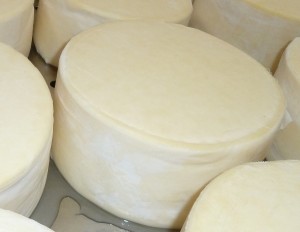 Do note though that bandaging tends to produce a drier, flakier cheese and traditionally it is used for Cheddars where this texture is often sought after.

Before bandaging, always make sure your cheese has been air dried for at least a week, for a nice dry surface.

First cut a top and bottom circle of bandage for your cheese from your normal cheese cloth. Cut these slightly bigger than the diameter of your cheese so it will hang over onto the sides of the cheese.

Then cut lengths of bandage that will cover the full diameter of the side of your cheese. Cut them to a height slightly wider than the height of the cheese so they again over hang onto the top and bottom of the cheese.

We are looking for an overlap of the bandages to make sure everything is sealed and there are no open edges.

Sanitize all pieces of cloth before you start bandaging.

There are a few options for fat based sealing products for your bandaged cheese. You can use ghee or butter, which some say work well with the flavors of the cheese, but I personally use lard as it doesn’t tend to go rancid like butter does.

Melt whichever fat you are using so that it is soft and spreadable. I work a little backwards with my lard so that I can make sure it is free of bacteria.

I first heat it until it is fully melted and clear, to kill any bacteria, then I let it cool and it is as it is cooling that I use it for bandaging.

If you are sure your fat has been kept sealed and bacteria free you can simply heat it and use when it is soft enough to work with.

Once the fat is heated drop your bandages into it to soak up some of the fat.

Then, take a circle of bandage, wipe off the excess and apply the bandage to the top of the cheese using a butter knife to spread out a layer of lard over all the areas of the bandage from the middle out to the edges, making sure you seal down the overhang.

It is important to make sure there are no dry spots on the bandage when you are finished.

Then turn the cheese over and put your other circle of cloth on the bottom of the cheese. Again, spread a layer of lard over the bandage and make sure you seal down the overhang.

Put your cheese into the press for 1 hour, at approximately 30kg, to press the lard into the bandage and any cavities in the cheese.

Now apply the side bandage around the edge of the cheese and once again (I know I’m repeating myself but this is important) press down the overhang so it now overlaps the top and bottom bandages.

Leave overnight and then repeat the same process, applying a second layer of bandaging. This make sure you have a good seal on your cheese.

Molds will form on the bandaging but should dry up in a short time and leave a really interesting and colourful looking cover on your cheese.

The fat will prevent any bacteria from making contact with the cheese, as long as you have fully covered and sealed the entire cheese and bandaging.

Like waxing, bandaging takes a bit of work to get the hang of but it is a fun process that can actually be quite therapeutic once you get into it.

Have you tried bandaging your cheese? Is this a method you like to use? Or do you have questions about something I haven’t mentioned about bandaging? Join the discussion over at the Curd Nerd Forum. We would love to hear from you!